For decades, scientists have known that the effects of global climate change could have a potentially devastating impact across the globe, but Harvard researchers say there is now evidence that it may also have a dramatic impact on public health, reports ScienceDaily.

In a paper published in the July 27 issue of <i>Science,</i> a team of researchers led by James G. Anderson, the Philip S. Weld Professor of Atmospheric Chemistry, warn that a newly-discovered connection between climate change and depletion of the ozone layer over the U.S. could allow more damaging ultraviolet (UV) radiation to reach the Earth's surface, leading to increased incidence of skin cancer, because of the effects of the lightning generated by powerful storms on the chlorine and bromine high in the atmosphere, which in turn reduces the level of ozone.

Posted by Nobilangelo at 18:20:00
Email ThisBlogThis!Share to TwitterShare to FacebookShare to Pinterest

In early-to-mid July 2012 satellites saw unprecedented melting in Greenland--reaching up to 97% of the surface. 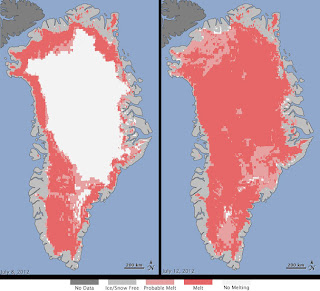 Full story on this NASA site.

Posted by Nobilangelo at 10:25:00
Email ThisBlogThis!Share to TwitterShare to FacebookShare to Pinterest


New research from the Niels Bohr Institute at the University of Copenhagen indicates that, contrary to previous opinion, the rise in temperature and the rise in the atmospheric CO2 follow each other closely in terms of time. The results have been published in the scientific journal, Climate of the Past, reports ScienceDaily. 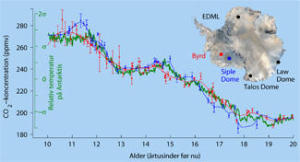 'What we are observing in the present day is the mankind has caused the CO2 content in the atmosphere to rise as much in just 150 years as it rose over 8,000 years during the transition from the last ice age to the current interglacial period and that can bring the Earth's climate out of balance,'says Sune Olander Rasmussen, Associate Professor and centre coordinator at the Centre for Ice and Climate at the Niels Bohr Institute.

The research, which was carried out in collaboration with researchers from the University of Tasmania in Australia, is based on measurements of ice cores from five boreholes through the ice sheet in Antarctica. The ice-sheet is formed by snow that doesn't melt, but remains year after year and is gradually compressed into kilometers thick ice. During the compression, air is trapped between the snowflakes and as a result the ice contains tiny samples of ancient atmospheres. The composition of the ice also shows what the temperature was when the snow fell, so it is an archive of past climate and atmospheric composition.

Posted by Nobilangelo at 13:14:00
Email ThisBlogThis!Share to TwitterShare to FacebookShare to Pinterest


Worldwide, 2011 was the coolest year on record since 2008, yet temperatures remained above the 30-year average, according to the 2011 State of the Climate report released online on July 10, 2012 by NOAA. The peer-reviewed report, issued in coordination with the American Meteorological Society (AMS), was compiled by 378 scientists from 48 countries around the world. It was reported on ScienceDaily.

The Arctic continued to show more rapid changes than the rest of the planet. Sea-ice shrank to its second smallest 'summer minimum' extent on record during 2011, as older ice (four to five years old) reached a new record minimum at more than 80% below average. Overall, glaciers around the world continued to lose mass. Loss from Canadian Arctic glaciers and ice caps were the greatest since measurements began in 2002.

Four independent datasets show 2011 among the 15 warmest since records began in the late 19th century, with annually-averaged temperatures above the 1981-2010 average. The Arctic continued to warm at about twice the rate compared with lower latitudes. On the opposite pole, the South Pole station recorded its all-time highest temperature of -22.1°C (9.9°F) on December 25, breaking the previous record by over 1 degree Celsius (over 2 degrees Fahrenheit).

The extent of Arctic sea-ice was below average for all of 2011 and has been since June 2001, a span of 127 consecutive months.

The ozone-level over the Arctic was the lowest since records began in 1979.

Even with La Niña conditions occurring during most of the year, the 2011 global sea-surface temperature was among the twelve highest years on record. Ocean heat content, measured from the surface to 700 metres deep (2,300 feet), continued to rise since records began in 1993 and was a record high.

La Niña-related heat waves, like that experienced in Texas in 2011, are now twenty times more likely to occur during La Niña years today than La Niña years fifty years ago.

The UK experienced a very warm November 2011 and a very cold December 2010. In analyzing these two very different events, UK scientists uncovered interesting changes in the odds. Cold Decembers are now half as likely to occur now versus fifty years ago, whereas warm Novembers are now sixty-two times more likely.