Although the final data is not in, it seems that the maximum winter extent of sea-ice in the Arctic is tied with 2006 as the lowest ever measured by satellites. That also means that the last seven years have seen the seven lowest measurements since records began in 1979. Full report on ScienceDaily.
Posted by Nobilangelo at 10:04:00
Email ThisBlogThis!Share to TwitterShare to FacebookShare to Pinterest

AMAZON FORESTS NOT IN GOOD HEALTH

A new NASA-funded study has revealed widespread reductions in the greenness of the forests in the vast Amazon basin in South America caused by the record-breaking drought of 2010.

'The greenness levels of Amazonian vegetation--a measure of its health--decreased dramatically over an area more than three and one-half times the size of Texas and did not recover to normal levels, even after the drought ended in late October 2010,' said Liang Xu, the study's lead author from Boston University.

Full report on ScienceDaily.
Posted by Nobilangelo at 11:08:00
Email ThisBlogThis!Share to TwitterShare to FacebookShare to Pinterest

A rapid, large-scale change in the type of trees is accelerating in Russia's boreal forest, which spans its cold northern regions, and is the largest continuous expanse of forest in the world. The change is the result of globally and regionally warming climate. That in turn is creating an even warmer climate in the region, according to a new study reported in
ScienceDaily
Posted by Nobilangelo at 09:39:00
Email ThisBlogThis!Share to TwitterShare to FacebookShare to Pinterest
CO2 RAPIDLY AFFECTS ATMOSPHERIC STRUCTURE

New research reported in ScienceDaily work shows that carbon-dioxide rapidly affects the structure of the atmosphere, causing quick changes precipitation, as well as many other aspects of Earth's climate, well before the greenhouse gas noticeably affects temperature.

‘The direct effects of carbon-dioxide on precipitation take place quickly,’ said a lead researcher. ‘If we could cut carbon-dioxide concentrations now, we would see precipitation increase within the year, but it would take many decades for the climate to cool.’
Posted by Nobilangelo at 09:18:00
Email ThisBlogThis!Share to TwitterShare to FacebookShare to Pinterest

ScienceDaily outlines a paper published in 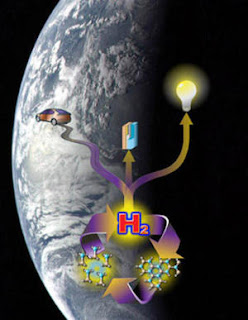 Science magazine that reveals a breakthrough in using ammonia borane to store hydrogen that will make it a far more attractive fuel for vehiclesby researchers at the Los Alamos National Laboratory describes a simple scheme that regenerates ammonia borane from a hydrogen-depleted 'spent fuel' form (called polyborazylene) back into a usable fuel via reactions in a single container. That 'one pot' method represents a significant step toward the practical use of hydrogen in vehicles by potentially reducing the expense and complexity of the recycling stage. Regeneration takes place in a sealed pressure-vessel in off-vehicle sites using hydrazine and liquid ammonia at 40 degrees Celsius. The researchers envision vehicles with interchangeable hydrogen storage tanks containing ammonia borane that are used then sent back to a factory for recharging.
Posted by Nobilangelo at 11:45:00
Email ThisBlogThis!Share to TwitterShare to FacebookShare to Pinterest

Unusually low temperatures in the Arctic's ozone layer have initiated a massive depletion of ozone there recently, and the Arctic seems to be heading for a record loss. At the relevant altitudes about half the ozone that above the Arctic has been destroyed in recent weeks, which may also affect regions further south. Scientists expect further depletion, because the conditions that caused the unusally rapid depletion are continuing. Full report on ScienceDaily.

The predicted drop in the temperature of the stratosphere as the troposphere warms due to climate-change was obviously right on the button.
Posted by Nobilangelo at 17:26:00
Email ThisBlogThis!Share to TwitterShare to FacebookShare to Pinterest

The Greenland and Antarctic ice sheets are losing mass at an accelerating rate, according to a new NASA-funded satellite study, the longest study of changes in polar ice sheet mass. It suggests that they are overtaking the loss from mountain glaciers and ice-caps to become the dominant contributor to global sea-level rise, much sooner than model forecasts have predicted.

In 2006, a year in which comparable results for the loss from mountain glaciers and ice caps are available from a separate study, the Greenland and Antarctic ice-sheets lost a total average of 475 gigatonnes a year, enough to raise global sea-level an average of 1.3 millimeters a year

The pace at which the polar ice sheets are losing mass was found to be accelerating rapidly. Each year over the course of the study, the two ice-sheets lost a combined average of 36.3 gigatonnes more than they had the year before. In comparison, the 2006 study of mountain glaciers and ice caps estimated their loss at 402 gigatonnes a year on average, with an acceleration rate a third that of the ice-sheets.

'That ice-sheets will dominate future sea-level rise is not surprising -- they hold a lot more ice than mountain glaciers,' said lead author Eric Rignot, of NASA's Jet Propulsion Laboratory, Pasadena, California, and the University of California, Irvine. 'What is surprising is this increased contribution by the ice-sheets is already happening. If present trends continue, sea-level is likely to be significantly higher than levels projected by the United Nations Intergovernmental Panel on Climate Change in 2007.'

The authors conclude that if the rate at which the ice-sheets are now melting continues, the world's oceans would be 15 centimetres higher by 2050. When that is added to the predicted contribution of 8cms from glacial ice caps and 9cms from thermal-expansion, the total could reach 32cms.

Full report in ScienceDaily.
Posted by Nobilangelo at 09:57:00
Email ThisBlogThis!Share to TwitterShare to FacebookShare to Pinterest

A report in ScienceDaily links the warming of the planet with the extreme winter weather that has hit the United States in the last two years.

What goes round comes round: the United States is responsible for a huge amount of the total global carbon-emissions, and more per head than any other nation.
Posted by Nobilangelo at 15:03:00
Email ThisBlogThis!Share to TwitterShare to FacebookShare to Pinterest
Newer Posts Older Posts Home
Subscribe to: Posts (Atom)