A groundbreaking study led by University of Miami (UM) scientist Shimon Wdowinski shows that earthquakes, including the recent 2010 ones in Haiti and Taiwan, may be triggered by tropical cyclones (hurricanes and typhoons).

'Very wet rain events are the trigger,' says Wdowinski, associate research professor of marine geology and geophysics at the UM Rosenstiel School of Marine and Atmospheric Science. 'The heavy rain induces thousands of landslides and severe erosion, which removes ground material from the Earth's surface, releasing the stress load and encouraging movement along faults.'

Wdowinski and a colleague from Florida International University analyzed data from quakes magnitude-6 and above in Taiwan and Haiti and found a strong temporal relationship between the two natural hazards, where large earthquakes occurred within four years after a very wet tropical cyclone season.

Which means that because global overheating will increase the number of tropical cyclones, bringing more heavy rain, we can also expect an increase in the number of significant earthquakes.

Posted by Nobilangelo at 09:00:00
Email ThisBlogThis!Share to TwitterShare to FacebookShare to Pinterest

It is fitting that EStarFuture Corporation, which has such a strong emphasis on R&D, has added to its repertoire by becoming a portal for SmallParts, a division of Amazon, 'the hardware store for researchers and developers', which stocks 200,000 items for R&Ders, including laboratory and scientific supplies, metalworking tools, measurement and inspection tools, raw materials, fasteners, tubing, power-transmission products, etc., etc. A vast range. The hundreds of brands feature a host of top names, such as 3M, De Walt, Rockwell...

As Edison said, invention is 1% inspiration and 99% perspiration. In other words R&D needs tools and materials to turn ideas into reality. Small Parts is an outlet to fulfil that need.

Click here for EStarFuture's portal to Small Parts.
Posted by Nobilangelo at 09:28:00
Email ThisBlogThis!Share to TwitterShare to FacebookShare to Pinterest 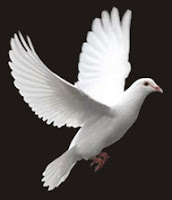 As this post by our CEO shows, the 3475-square-metre property that is EStarFuture's headquarters (shared with the CEO) has been invaded by doves.

It a very fitting juxtaposition: white, glorious doves and a company that wants us to be living at peace with the planet.

Invaded by doves, blessed by doves, surrounded by doves, accompanied by doves. Would that every company had such companions and their daily inspiration!
Posted by Nobilangelo at 20:09:00
Email ThisBlogThis!Share to TwitterShare to FacebookShare to Pinterest

ScienceDaily reports that an unusually hot melting-season in 2010 accelerated ice loss in southern Greenland by 100 billion tons. Fifty GPS stations planted along the coast to measure the bedrock's natural response to the ever-diminishing weight of ice above it, showed that large portions of the island's bedrock responded by rising another 6mm (0.25 of an inch).

The bedrock rises 15mm a year, but the temperature spike in 2010 lifted it more in only five months--as much as 20mm in some places (0.79 of an inch).
Posted by Nobilangelo at 13:13:00
Email ThisBlogThis!Share to TwitterShare to FacebookShare to Pinterest

TUNA ON THE EDGE OF SUSTAINABILITY

Tuna stocks have declined 60% since 1954, reports Science, and in some areas more than 90%.
Posted by Nobilangelo at 12:34:00
Email ThisBlogThis!Share to TwitterShare to FacebookShare to Pinterest 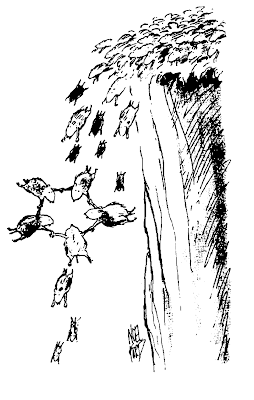 How much stupider can we humans get? We are wrecking the only planet we can live on in the entire universe, we have been given that message over and over and over again, we have been told very plainly how we are doing it, we have been told that we must to stop pumping carbon-dioxide into the atmosphere, yet we persist in making things worse, led by prats who we are too stupid to vote out of office because we actually like wrecking our home and don't want to pay a cent to stop it or fix the mess.

So last year we actually increased the amount of CO2 by 5.9%. Nearly six percent more! That is arrant, arrogant insanity. We have added 50% in the last 20 years. The combustion of coal accounts for more than half of the growth.

The New York Times adds its thunder to the insane litany.

An epsilion-semi-moronic, brain-damaged, frontally-lobotomised earthworm could do better. And we think of ourselves as the most intelligent life-form...

We are like the lemmings in the cartoon. Blindly plunging over the cliff, and the 'best' thing any can think of is to behave like happy sky-divers.